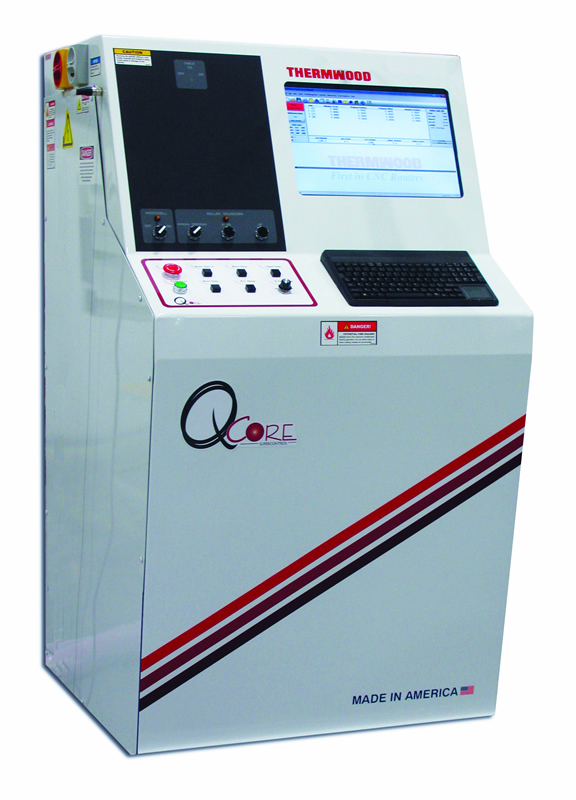 This control is designed from its very core to operate a CNC router with efficiency and higher productivity. It is a fully multitasking control utilizing a 4th Generation Intel® Core™ i5 Processor. It features a high level of hardware integration, extensive use of reliable surface mount technology and a built in upgrade path for future technology.

Thermwood’s SuperControl currently incorporates more advanced control features than any other CNC control in the woodworking industry. As well as, trims formed parts or machine patterns or molds using full five-axis simultaneous motions within the thermoformed,composite and fiberglass applications.

And, because Thermwood controls all the technology, you have single source responsibility. Thermwood stands behind and supports the entire system and when new technology comes out it can easily be upgraded. The SuperControl is equipped with a 19” full color LCD flat screen monitor and 1 TB hard drive.

The control uses a Microsoft® Windows® 10 Professional operating system, offering the operator choices for program and machine operation display, popup windows for event and information display, pop-up windows for data input, and the ability to operate the machine in the background while doing other tasks on the control. The SuperControl can also create programs directly at the machine with a newly designed Hand Held Programmer. 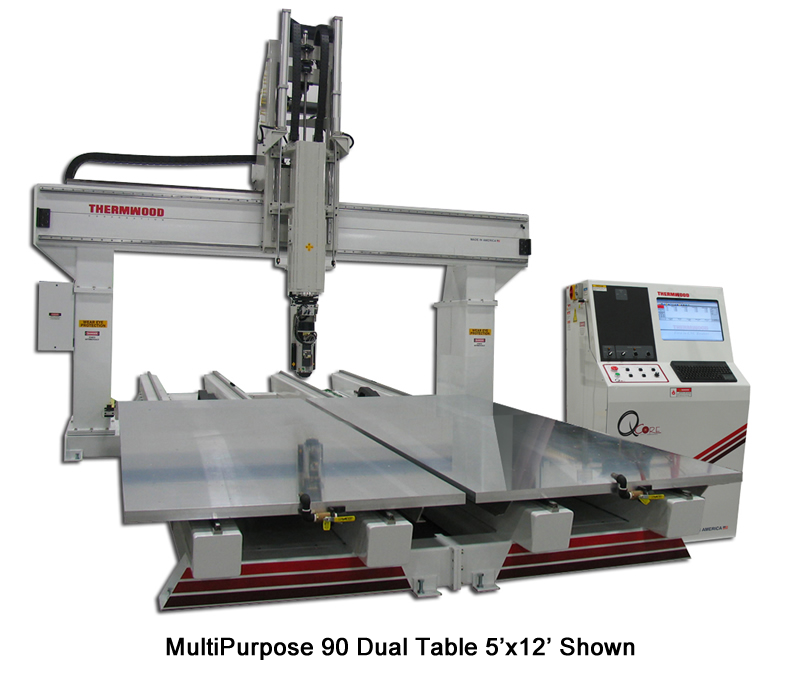 Operating a CNC machine in the real world involves more than just running a program. It requires a multitude of disciplines including, among others, tooling, maintenance, configuration, error handling, adjustment and support. First generation controls don’t do any of this so you must handle it all yourself. This requires a high level of skill and training plus a lot of downtime as you fumble with problems. Next generation controls have systems for quickly and easily handling all this, many times automatically in the background. First generation controls are less productive, requiring more effort, more time and more training generally resulting in more downtime, missed schedules and more frustration. All these problems in an effort to save a little money and yet the difference in cost is insignificant compared to the cost of a typical CNC router.

When you move into more advanced applications, machining complex CAD generated surfaces or three-dimensional volumetric compensation of large envelope machines, no other control can match the QCore SuperControl. It easily executes multi-gigabyte programs that choke other controls, creating complex surfaces to unheard of accuracies. There are even higher level functions reserved for highly experienced programmers and research labs to handle the most sophisticated applications. Whether you are making simple cabinets or the most sophisticated scientific project, no CNC control will outperform Thermwood’s QCore SuperControl.

Machine Communication to the Operator

The QCore SuperControl has a tool management system used to define and manage tools. With the advent of automatic tool changers and random use of tools, this makes management of tooling easier and tracks tool use, informing the operator when tool life has expired for a particular tool. It can even automatically switch to a back-up tool when life expires. 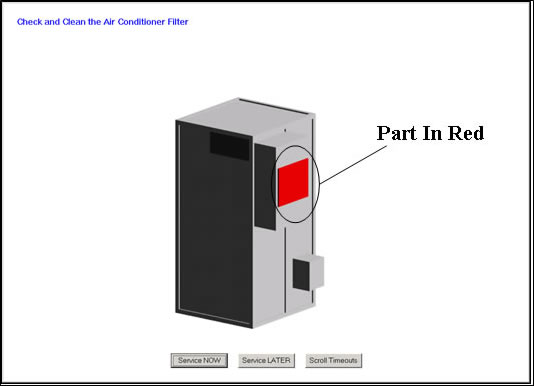 The QCore SuperControl tracks routine maintenance, alerting the operator when maintenance such as lubrication or filter cleaning is required. 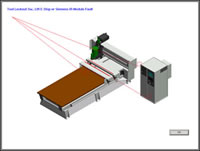 When an error occurs, the control displays a diagram of the machine pointing out possible causes for the error and suggesting solutions.

The QCore SuperControl includes a complete operator’s manual that can be displayed on the screen including the ability to search for words or phrases. 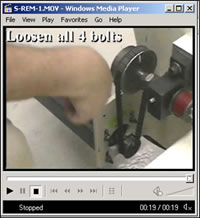 The QCore SuperControl will display videos that detail common maintenance adjustment or repair procedures, allowing users to perform many of these functions without outside technical assistance. 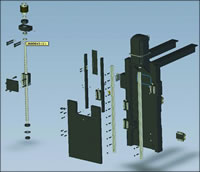 The QCore SuperControl can display three-dimensional images of all machine assemblies which can be rotated and exploded on the screen. This shows customer maintenance people the assembly sequence for all components and, by placing the cursor over any part it displays the part number making it easy to order replacement parts.

When a job containing a large number of parts is sent to the QCore SuperControl, it nests the parts, tells the operator the number of sheets of each material needed for the job and guides him through the job step by step.

Using the Virtual Service communications link allows a Thermwood technician to access all the data, error logs and configuration files that he could access if he were actually at the machine.

Using the Virtual Service communication link the Thermwood technician can evaluate machine performance, then adjust and reconfigure the machine as required, all remotely.

Most machine problems are caused by programming errors. The Virtual Service communication link allows a Thermwood technician to review, and if necessary modify programs working directly with the customer.

Purchase tooling or spare parts at the control

Using the Virtual service communication link a customer can purchase spare or replacement part right through the QCore SuperControl. 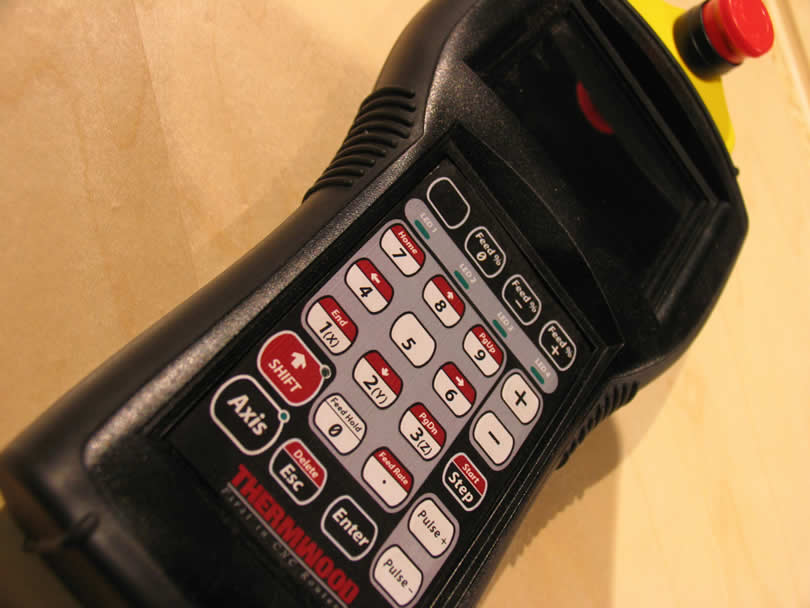 Thermwood offers a hand held programming device that is used to move the machine around. It is used to quickly, easily and intuitively create programs without having to deal with cryptic CNC code. This is a great tool for those not familiar with CNC 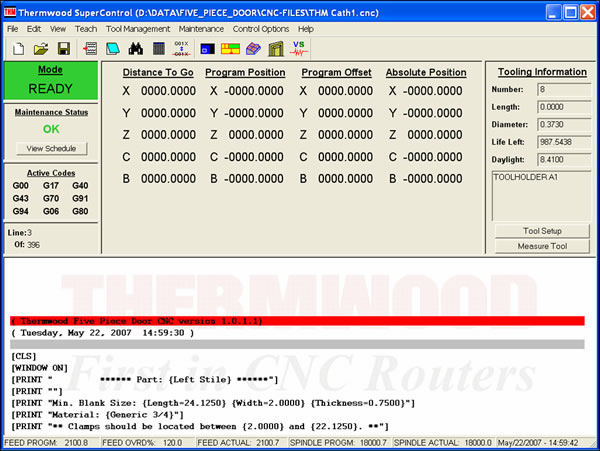 You can toggle the program display on all Thermwood controls from the cryptic “M” and “G” code, EIA designators to an English language description of each line in the program. This greatly simplifies operation and learning for people not familiar with CNC code.

Certain materials such as high pressure laminates and certain types of plywood with abrasive adhesive between layers will quickly dull tooling at the point or points where the tool contacts the abrasive layer or layers. The QCore SuperControl has a feature which oscillates the tool up and down as it cuts to move this abrasive contact point over a larger area of the tool increasing tool life dramatically. 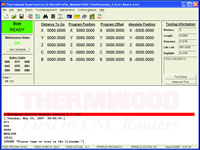 A full size, full color flat panel display makes information easier to read and understand, allows display of more information, including graphics and pictures and generally makes the control simpler and easier to use. 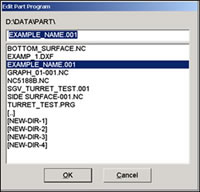 The QCore SuperControl has, as standard, a 1 Terabyte hard disk drive allowing storage at the control of tens or hundreds of thousands of part programs and allows the storage of very large programs such as those used for carving. The control can easily, efficiently and without pausing, process programs that are many gigabytes in size, and can process blocks of data at unequaled speeds, resulting in faster execution of these types of programs.

Thermwood encloses its controls, including power supplies and servo drives, in a sealed, air conditioned cabinet keeping them cool, free from contamination which substantially improves reliability.

Thermwood uses professional wiring practices in its control, labels and color codes all wires, labels major components inside the control cabinet to make finding them easy for service (changing a fuse for example), and supplies complete blueprints of wiring inside the control. 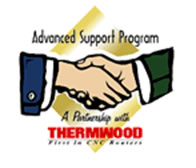 Advanced Support Program - Since Thermwood designs its own control, it can tailor new features so that they can be easily added to existing controls. This keeps you competitive as control technology advances. Thermwood offers an Advanced Support Program which provides automatic software updates each year, continuing Virtual Service and discounts on hardware upgrades and other service products.

Thermwood builds both the machine and the control. Should you have a problem it is Thermwood and no one else responsible for fixing it.

Upgrade Existing Controls to Next Generation